What is the Commonwealth Flag? 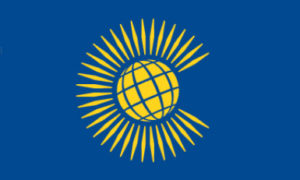 Where did the Commonwealth’s symbol originate from? 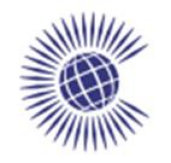 The Commonwealth symbol was originally designed by the Gemini News Service, London in 1972 and approved by the first Commonwealth Secretary-General, Mr Arnold Smith C.H.

In 1989 a second logo was introduced to appear on official Commonwealth Secretariat publications, and in 1999 a special commemorative logo was produced to mark the 50th Anniversary of the modern Commonwealth.

In 2000 the previous Secretary-General, Rt Hon Don McKinnon, approved a new design that is now in use in place of the original designs.  This design incorporates the image of the globe used in the original logo and the spears that make up the letter ‘C’ from the 1989 design.

The radiating spears do not represent the number of countries in the Commonwealth but symbolise the many facets of Commonwealth co-operation around the world. The symbol is used on all official documentation and, sometimes in association with other specially developed logos, for the documents and logos of all Commonwealth Meetings.

To herald the amazing and influential family of nations which spans all the continents, a ‘Fly-a-Flag’ tribute was held on Commonwealth Day 2014.

Hundreds of Commonwealth flags were flown in significant, strategic and eye-catching positions across the UK and beyond – with many expected to flutter their way proudly through to the Commonwealth Games in Glasgow on July 23rd – August 4th.

Bath & North East Somerset took part in the tribute, holding a ceremony in the Chairman of the Council’s Room and flying the Commonwealth flag from the Guildhall.