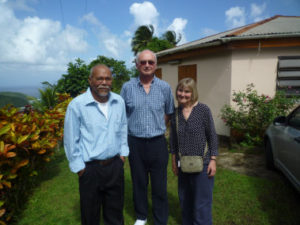 The RSC Bath and District Chair Godfrey Hall and his wife Sue meeting up with Charles Williams Chief of the Kalinago at their community headquarters on the Caribbean island of Dominica, also the birthplace of the current Secretary General of the Commonwealth Baroness Scotland. The Kalinago are an indigenous people of the Lesser Antilles in the Caribbean who have inhabited the island for many centuries, long before it was discovered by Christopher Columbus in the 15th century. There are around 2000 living on the east of the island on a 3700 acre territory.