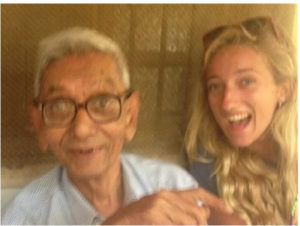 RCS Bath awarded Hannah Stockley a donation of £400 towards her gap year project, as part of which she travelled to India to gain a greater understanding of different cultures and political regimes.

Before travelling to India, Hannah’s hopes were:

“I hope the project will make me both laugh and cry, but still knowing that at the end of the day I have achieved something through bringing energy and enthusiasm to a small community”

“I know you hear stories about how incredible travelling experiences are and how life changing they can be, and before having gone I used to think that was terribly cliché but having experienced it, I can confirm it is true.”

“I did a charity project in India in May, it involved helping out at an elderly care home in the mornings and then teaching in a slum in the afternoons.  I was apprehensive about the elderly home at first, not knowing what to expect but I shortly became accustomed to the routine and became close with them.  The stories they had to tell about their lives were truly heart-warming.  One man had been part of the Navy and had sailed all around the world; another had been a professional singer.  It was incredible to hear how fulfilling their lives had been.” 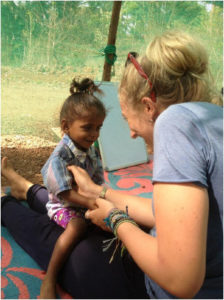 “I travelled to a slum in the afternoons to teach the children living there.  This was my favourite part.  However frustrating it was to write the letter A over and over again, the look on their face when they finally got it right was worth it.  They were so keen to learn and despite the conditions they lived in were so happy all of the time.  I joined in with their football game at the end of each session, which they all found hilarious!”

“Without the help of RCS, my trip wouldn’t have been possible, so thank you, it was the best few months of my life.”

Hannah, who was a pupil at Kingswood School, had previously worked in an AIDS orphanage in Malawi.