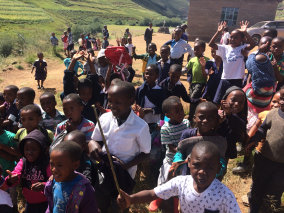 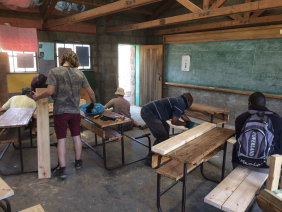 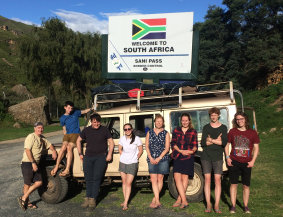 Although I could scribe for hours the many excitements and adventures I felt and had in South Africa, it dawns on me that not a single word would be anything remotely new or enlightening to you. Therefore, I will attempt to focus solely on the charitable work we performed across 4 different schools ranging from South Africa to Lesotho. Before I begin however, I would like to emphasise not only how truly grateful I was for the grant, but how much it financially saved me and my relatively struggling family. Not only this, but also that the trip itself was fantastic, exciting, fun, life changing and most importantly, eye opening, more specifically, of the current racial inequality and tensions in South Africa and the brutal treatment of the poor there.

When we first arrived in South Africa, we visited the school Kwa Pitela in order to discuss what we would be doing in a week’s time there. The visit, intended to encompass a mere 30 minutes, transformed rather inevitably into a day-trip. Upon arrival, a group of small children chased our rover up the dusty path, cheering and waving sticks. It was at that point that our group of 8 (5 kids and 3 adults) realised the stigma and infrequency of white people in such poor locations and schools. We appreciated it, in fact, we loved it. As we drove into the school past the barbed wire fences and corrugated metal shacks along the dusty road, the stares and waves continued. The school itself, however, was truly shocking and rather upsetting. There were 3 main buildings with a shipping container as a library. The school layout consisted of a dusty courtyard at the centre with no infrastructure whatsoever, surrounded by the three buildings. One dark, crumbling and barren with a metal roof, another very similar, and another which looked more like a prison with red brick walls at least 7ft high. Although I never found out about that room, the gathering of rather aggressive looking youths told me it was perhaps a classroom for the more dangerous and ‘unwilling’ students. The toilets consisted of a few stone walls, creating 4 dead ends with almost no privacy. In each one, a bucket, releasing a smell and heart wrenching, disgusting sight that drove the female member of our party to tears.

The students themselves, at first, did nothing more than stare. Coming from a middle class, white dominated area, the sight of 200 black children simply staring and chatting nervously was rather exciting, yet shocking. The teachers themselves were surprisingly unenthusiastic, but the kids were the complete opposite. At first parting upon our increasing proximity to form a path for us, it did not take long for them to start grabbing us by the hands and lead us to a site where kids would be doing backflips and playing basic games with little toys I’d never seen before. They loved to see us impressed or to try and get involved. We then got roped into teaching two classes for an hour with no prep or aid whatsoever.

The next school we went to, Imprim, was in Lesotho. There, we had a similar reaction, yet the school itself was poorer, with around 20 broken benches and desks; most of the classes had purely grey stone walls, no colour in sight, often very few windows, entirely desolate. Therefore, for the next 2-3 days, we repaired all 20 desks and benches and painted an entire classroom. Furthermore, we left the school with all the tools and materials needed to fix them again in the future, as well as money which we all donated. What made our group so memorable, however, and caused the most appreciation, was that we taught the teachers exactly what to do; we taught them how to fix the desks and how to use the tools. The teachers took an immediate and keen interest in the work, being able to repair an entire desk and bench within a couple of hours, themselves. It’s these skills that I perceive as truly constructive, for they can now continue to fix the benches as soon as they get broken and by extension, teach others to do the same in their local areas.

While also in Lesotho, we visited another school, in similar conditions, to hand them money, clothes and teaching materials. In another, a volunteer-run night school for shepherd children, we helped to teach them English, and bought jewellery from them. I will never forget Lesotho, by far the best part of the trip, the kids were so friendly and eager to learn, so happy with what little they had, and thus I’ll never forget, and have a deep urge to visit again, Lesotho.

Upon arrival at Kwa Pitela again, we were equipped with full lesson plans and spent two days teaching the kids pronunciation in order to aid their entry into secondary education, for this was the main factor preventing them from being able to do so. By the end, the kids became so fond of us that they were hugging and begging for us not to leave. They made us presents and we took countless pictures with them. 6 boys, ranging from 11-15, in fact, I became so fond of that I remembered all their names (despite Zulu names being long and complicated).

Altogether, we not only made small term differences to the children, but believed that we were making long-term changes to improve their futures. Thus, the trip, and all the money and goods and knowledge and tools we left them with, we hope, will affect them and many other children to come. I must finally apologise for the lateness of this document, and lay the blame both on catching up on school work, and becoming bored of retelling the tales of my trip so many times.