On August 24th Godfrey Hall, Chair of the RCS Bath and District Branch together with his wife Sue attended the unveiling of a memorial stone by the High Sheriff of Bristol, Helen Wilde to Robert Edwin Bush who opened the Bishops Knoll Hospital for Australian soldiers in Bristol at the start of the First World War. Set up at his own expense by the end of the Great War over 2000 Australian Service Personnel had been treated and recovered there. Robert Bush had emigrated to Australia in 1878 where he became a multi millionaire, a keen cricketer and a very successful sheep farmer. 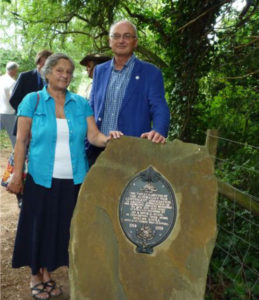 The event was also attended by Tessa Kerry his granddaughter, the West Country Chair of the Britain Australia Society Keith Newton, Lt Colonel Arthur Tsamis from the Australian Defence Force and representatives of the Woodland Wildlife Trust who maintain the site which is close to the Avon Gorge. A large crowd of well wishers ere then taken on a tour of Bishops Knoll Wood.